The most beautiful parks in Barcelona 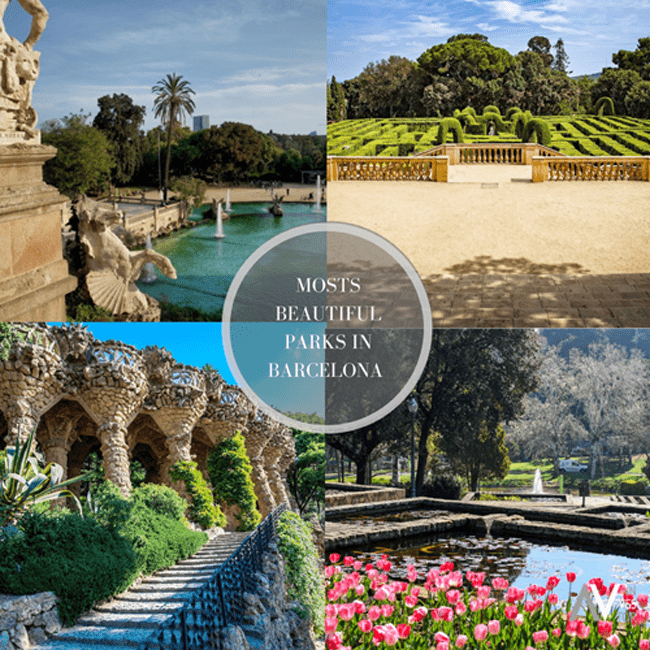 The verdant Montjuïc (the most famous hill in Barcelona) is a mountain within the city, but above all a place of culture, relaxation and relaxation.

Overlooking the old port and located in the south west of the Catalan capital, it is here that tourists and locals alike meet to visit the many monuments that the park offers.

You can find there: the national museum of art of Catalonia, the castle of Montjuic and many others..

Parc de la Ciutadella is a park located in the centre of Barcelona.

La Ciutadella, from which the park takes its name, was a citadel built in the early 18th century by Philip V of Spain following the War of Succession.

It covers 17 hectares, part of which is occupied by the Barcelona Zoo.

The park (Parc del laberint d’Horta) is a historic garden, laid out at the end of the 18th century, and is the oldest park in Barcelona that still has this function. The neoclassical park takes its name from the labyrinth in the park. The park, and especially the labyrinth, is perfect for a visit with children, but on other days it is an oasis of tranquillity in the crowded city that is Barcelona. In this park in the Horta-Guinardó district you will find mostly locals.

Guinardo Park is located between the districts of Eixample, Gracia and Horta.

Guinardo Park is a forest of Mediterranean trees (pines, olive trees, mimosa, cedar, cypress) on top of a hill with several footpaths.

The top of the park was home to bunkers during the Spanish Civil War, the walls of which are now used as canvases by graffiti artists. The people of Barcelona like to meet in the park during the day and even more so in the evening over a beer.

Park Güell is a large public park built between 1900 and 1914 by Antoni Gaudí, a major exponent of Catalan modernism, which is on the UNESCO World Heritage List.

Some of Gaudí’s most original and enigmatic creations can be found in its more than 17 hectares, such as the dragon on the main porch, the entrance pavilions and the sinuous bench in the large central square. All of these symbolic elements make Park Güell a magical and inimitable place not to be missed in Barcelona.